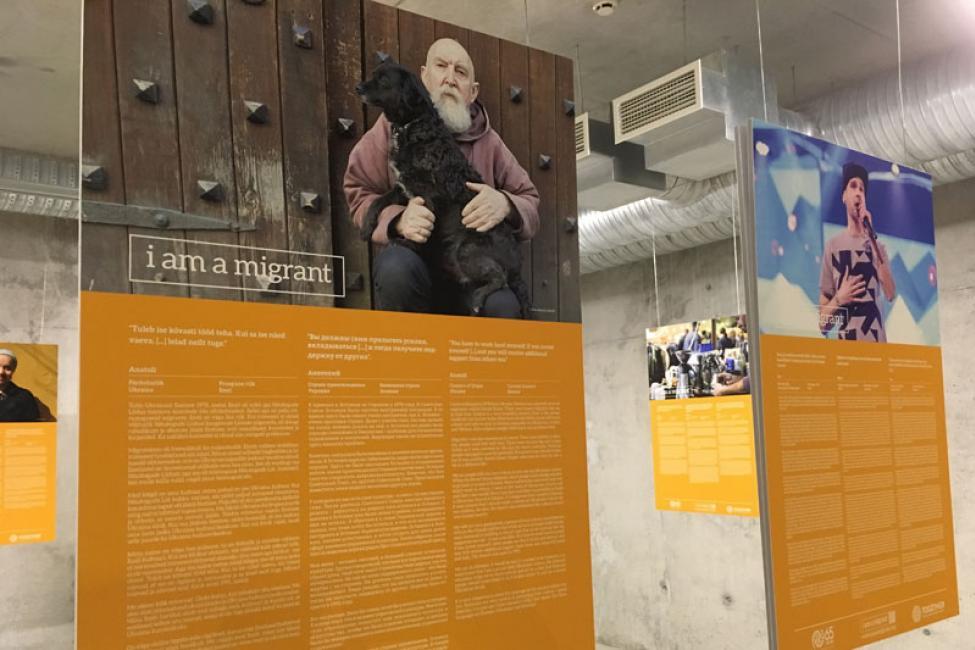 IOM, Embassy of Sweden in Estonia, “I am a Migrant” exhibition at the Museum of Occupations. Photo: UN Migration Agency (IOM) 2017

Estonia - Human rights, social cohesion and international cooperation are the focus of recommendations that IOM, the UN Migration Agency, made to the Estonian Government. Estonia has now taken the helm of the Presidency of the Council of the European Union (EU) from July to December 2017.

IOM Regional Director for the EU, Eugenio Ambrosi, said the Organization’s recommendations – released on Thursday (6 July) – are centered on the increasing need for international cooperation to protect migrants and promote social cohesion. He called on the Estonian Government to put human rights at the forefront of EU action on migration issues.

"IOM welcomes the Estonian Presidency's commitment to prioritizing migration because the challenges that both Europe and migrants face have reached a critical point where they can only be addressed by collective action and shared values," said Ambrosi. "IOM is ready to support the Presidency and EU member states through its global expertise and operational tools to advance our joint commitment to improving global migration governance and making sure that each and every migrant is assisted and their rights upheld," he added.

IOM’s paper specifically recommends three key action points for the Estonian Presidency: ensure that migrants’ human rights are respected, protected and fulfilled; promote social cohesion and integration as a positive mutual process between host societies and migrants; and enhance collaboration and conduct dialogue on an equal footing between countries of origin, transit and destination.

Last September’s UN Summit on Refugees and Migrants recognized the need for a comprehensive approach to human mobility and enhanced cooperation at the global level. At the Summit, UN Member States committed to “protecting the safety, dignity, human rights and fundamental freedoms of all migrants, regardless of their migratory status, at all times” through the adoption of the New York Declaration for Refugees and Migrants.

The New York Declaration set in motion a process of intergovernmental consultations and negotiations culminating in the planned adoption of the Global Compact for Safe, Orderly and Regular Migration in 2018. To deliver on the commitments made in the Declaration, the Global Compact should address all aspects of international migration, including human rights. A rights-based approach to migration in legislative, policy and programmatic discussions is the optimal way for states to successfully meet this commitment and there are hopes that this will be advanced during the tenure of the Estonian Presidency.

IOM's twice-yearly recommendations to the rotating EU Presidencies are guided by its Migration Governance Framework which is the first, and so far only, detailed articulation of planned and well-managed migration policies.

The six-month incumbent Presidents of the Council of the EU work together in groups of three in the interest of continuity and coherency. The current Presidential trio comprises Estonia (July/December 2017), Bulgaria (January/June 2018) and Austria (July/December 2018). The presidential representatives chair meetings at every level and propose the guidelines needed for the Council to take decisions.

Ambrosi will address diplomats and media on EU and global migration issues in Tallinn on Monday (10 July) at the IOM “I am a Migrant” campaign exhibition currently on display at the Museum of Occupations, in partnership with the Embassy of Sweden in Estonia.

Subscribe to IOM newsletter to receive the latest news and stories about migration.